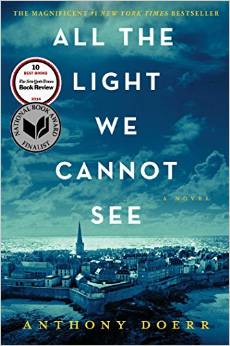 The title alone captured my attention when I first read about the highly acclaimed novel, All the Light We Cannot See. The title aptly captures the parallel stories of orphan boy Werner and blind Marie-Laure. The two children grow up in the face of World War II and their paths meet briefly, each of them impacting the other.

Lyrical prose, a stirring story, a hidden jewel. It didn’t take long for the story to grab me and not let go. Anthony Doerr’s writing is some of the most exquisite I’ve ever read. The characters captured my heart and imagination. Moving back and forth in time the narrative switches between Werner and Marie-Laure’s stories until the climatic moment when their lives collide.

I loved how Doerr weaves other famous pieces of art into his story. Twenty Thousand Leagues Under the Sea is an important “story within a story” that mirrors the action, to some degree, of his characters. Marie-Laure reads the novel throughout her World War II years, and the climax of Twenty Thousand Leagues parallels the climax in All the Light We Cannot See. Also, Marie-Laure’s great-uncle plays Clair de Lune for a few minutes over the illegal wireless after transmitting some numbers to the French resistance. After her great-uncle is no longer able to transmit over the wireless, Marie-Laure starts reading Twenty Thousand Leagues over the wireless instead. The music and story serve as an encouragement and inspiration to survive for a trapped Werner and his comrade.

Clair de Lune and Twenty Thousand Leagues Under the Sea are used as means of fighting the darkness and despair for Marie-Laure and her great-uncle. They might seem odd choices, but they push back against the night with their beauty. They remind people of a life worth living. All the Light We Cannot See reminded me of the story of Vedran Smailovic, the “Cellist of Sarajevo,” who in an act of defiance played his cello for 22 days on the site of a mortar blast in memory of the 22 civilians it killed. It reminded me how art can inspire, fight, and be a light against darkness.

The story of the “Cellist of Sarajevo” also inspired Sara Groves’ song Why it Matters. And I think it captures the spirit of at least one message contained within All the Light We Cannot See: that we all have a choice to dissent participating in darkness, that we can instead spread light, even if doing so seem very small and insignificant.

Speak to me until I understand
Why our thinking and creating
Why our efforts of narrating
About the beauty, of the beauty
And why it matters

Like the statue in the park
Of this war torn town
And it’s protest of the darkness
And the chaos all around
With its beauty, how it matters
How it matters

Like a single cup of water
How it matters

Why it Matters, -Sara Groves

For those of you who read All the Light We Cannot See, what did you think?