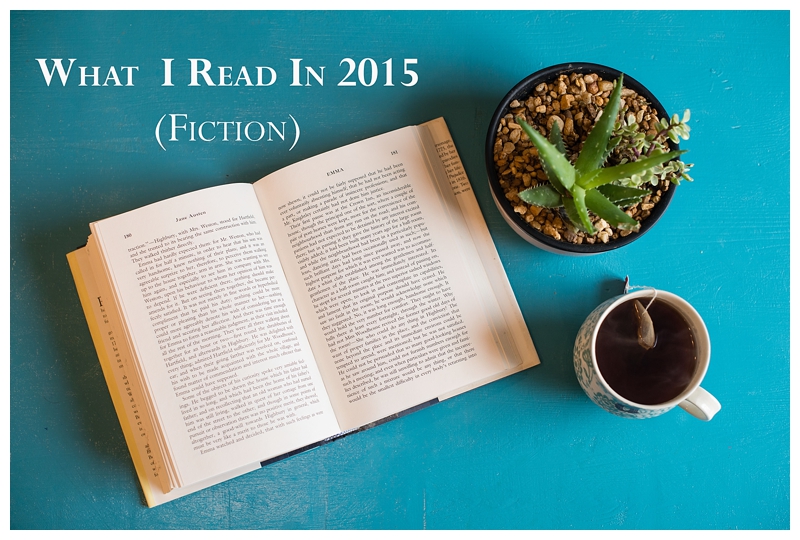 Today we’ll look at my roundup of fiction reads for 2015. By far, my favorite novel was All the Light We Cannot See followed by the Louise Penny series I’ve started and The Sweetness at the Bottom of the Pie. And of course, Dickens! Honestly, it was a year of mediocre fictional reads with only a few standouts. I hope to have more quality fiction next year and more classics.

The Girl on the Train by Paula Hawkins***
This was an exciting and fast-paced read although not particularly well-written or amazing. Fine for a pop-lit suspense sort of read. Some of it just seemed super implausible as far as the actions of the main character were concerned.

All the Light We Cannot See by Anthony Doerr*****
This was a tremendous piece of fiction that deserved the Pulitzer Prize that it won. For my complete thoughts read my entire review here.

Boston Girl by Anita Diamant**
This book grew on me. It was literally written as a grandmother speaking to her granddaughter. Large portions of story were summarized, so you know that saying “show, don’t tell,” well the author did the opposite. She summarized conversations and feelings. Just like you would if you were speaking to someone. But this made me not really connect with the characters as much. It also felt like she used the story as a vehicle to hit major points in history: women’s rights, WWI, child labor, etc. The best part was the fact that I listened to it as an audio book and Linda Lavin was a fantastic reader. But overall it was a “blah” sort of book.

Still Alice by Lisa Genova***
I liked this author’s Left Neglected a lot better than this book. While thought-provoking in terms of what it might be like to suffer from an early-onset Alzheimer’s disease, it was just okay.

A Tale of Two Cities by Charles Dickens****
I’d been wanting to read this book for a long time. Finally got to do so. A classic and relevant book. I was listening to it during the time of the Baltimore riots and it was surprisingly insightful to what still plagues us today: injustice, crime, and poverty and how those things overlap and influence each other and how all classes have equally admirable and corrupt people within them. All told with Dickens’ characteristic sarcasm.

Necessary Lies by Diane Chamberlain***
Forced sterilized, part of the eugenics program of North Carolina, forms the backdrop for Necessary Lies. The book was very engaging. I love fiction that takes a look at some part of history, so this was very interesting because I knew nothing of the program.

The story centers on client Ivy Hart and social worker Jane Forrester and how their lives become entangled in a question of right and wrong. Some of the side characters were rather one dimensional, but overall this was an engrossing yet sad look at something that really was happening in NC history.

The Strange Case of Dr. Jekyll and Mr. Hyde by Robert Louis Stevenson****
A classic book that explores the good and bad of human nature.

Still Life by Louise Penny****
I’m really enjoying this murder mystery series set in Montréal, Canada. The author skillfully probes human nature and the motivations for murder while introducing us to Inspector Armand Gamache, who is very likeable.

Orphan Train by Christina Baker Kline***
Another middle-of-the-road novel that didn’t live up to the hype that I kept hearing about it.  I listened to the audiobook version. I liked the book but it didn’t stand out. A good story, good writing, but didn’t find either one spectacular.

The Sweetness at the Bottom of the Pie by Alan Bradley*****
This book was positively delightful! I listened to it on audiobook and undoubtedly the excellent performance by Jayne Entwistle added to my delight.

11 year-old Flavia de Luce IS a little unbelievable but that did not bother me in the least. I loved her character and the plot of this murder mystery that is unconventional and unique. Bradley is an excellent writer. His metaphors are fresh and vivid. I did not realize this was the first of a series of books when I picked it up, but I will definitely be looking forward to reading–or listening–to more Flavia de Luce novels in the future!

Beowulf translated by Seamus Heany****
I mean, it’s Beowulf, what can I say?

A Fatal Grace by Louise Penny****
Another Inspector Gamache mystery. Didn’t like this one quite as much as the first but still good.

The Lake House: A Novel by Kate Morton***
I didn’t love this one quite as much as some of Morton’s past novels. One thing I don’t think I liked as much is all the points of view. Most of her novels have been confined to two points of view, one past, one present. This one had almost too many to keep track of. Perhaps she wanted to present all “sides” of the mystery and motivations of the characters, but for me, it was a little much. But I will always read Kate Morton!

How about you? What was your favorite fiction read of the year?